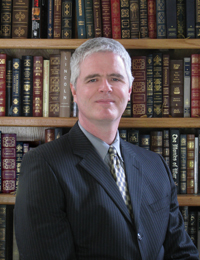 Don't go through this alone! Call Bob now to start your defense.

Robert S. Baska is a member of the New York State Bar Association and provides aggressive criminal defense to those charged with DWI and other felonies and misdemeanors. Bob recognizes there may be times when a client chooses to negotiate their most favorable plea based on a thorough evaluation of the facts of each particular situation. He also recognizes that each client deserves a tireless champion in court to spearhead their fight for justice, starting with the very first appearance in court, and continuing through trial as needed.

Valedictorian of his John Marshall Law School class, Bob received additional awards in criminal and constitutional law, and in civil procedure. He also received the Dean's Award for Academic Excellence, the only such award in his year group.

While in law school, Bob spent a year in the Solicitor's Office in Gwinnett County, Georgia prosecuting misdemeanors, including in hearings, jury and bench trials, and in appellate work. He also spent a summer as clerk for the Georgia Court of Appeals. Following graduation, he clerked for William "Bubba" Head, one of the most recognized DWI and DUI defense attorneys in the United States. Bob has co-written, ghost-authored, and edited 18 national and state-specific DWI and criminal defense books.

Prior to law school, Bob graduated from the St. Louis University School of Medicine, and completed his general surgery residency at Walter Reed Army Medical Center. He spent a total of 13 years in the United States Army, on both active duty and reserve status. A veteran of the First Gulf War as a paratrooper and surgeon with the 82nd Airborne, Bob had additional deployments in Germany with the First Infantry Division and Central America with the 82nd Airborne. He spent a total of 10 years in private medical practice before deciding to attend law school. While in private practice, he also volunteered for surgical missions in some of the poorest areas of Central America.

Besides Bob's legal writing, he has published two science fiction novels, along with numerous other magazine and scientific publications. He has presented at numerous scientific conferences. He has significant experience as an expert witness and has testified in the defense of murder suspects and in medical malpractice cases. He has also has assisted numerous attorneys with legal research and writing for diverse civil and criminal issues including medical malpractice, personal injury, and workers compensation, as well as assisting with appeals.

We will respond within an hour in most cases.